I wrote “Exposed” 10 days before Hurricane Sandy knocked the rest of my fence down in my front yard.  The irony was too easy, like a short bus joke, and so I did what I’ve so often done: nothing.  But here I am, posting photos. 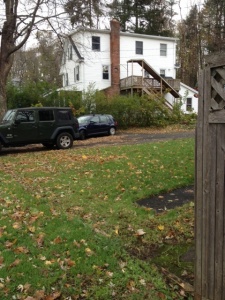 If I just sat back, and watched, I’d witness entropy pull my entire house apart.  Much like my kitchen, where, without daily maintenance, it would overtake me in an effective wave of dishes, bills, dog fur, and empty seltzer bottles.  Sometimes, people offer to help me out in well-meaning but futile manner, attempting to ameliorate my disorganization by suggesting a method to manage the madness.  Or, someone will pick up, say, a shirt, from the granite countertop and say “what’s this?  clean? dirty? what’s the deal?”*  But, like an innocent soul, new on the scene who loans money to a drug addict, we see that does not work. Because some problems, like messes, can only be managed, rather than solved. Most people find, as with houses, the key lies in the maintenance.

The storm in October devastated many people’s lives.  Currently, they say damage is in the 60 billions in dollars. It isn’t lost on me that my life was barely touched in comparison, and that if anything, I lost a symbol of privacy, and added a spring project.  I’m keeping perspective here.

*Something I thought only my mother did, but I actually have seen two other people do it, one recently, so I know it’s a human thing, not just a mom thing.

This entry was posted in fun with homeownership. Bookmark the permalink.