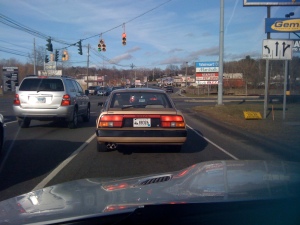 …why I have a thing for old Datsun Zs. I pursued this gentleman (while ironically driving an M3) yesterday as long as I could, much to the chagrin of my passenger who moaned and complained loudly about how much he hates that type of car. I told him, if I had grown up in a dysfunctional family, and my father had Datsun parts and pieces littering the front yard, signs of projects with no hope for completion, and each time my father drove me to school in one of those Datsuns, he played the same Genesis album on cassette tape repeatedly, then I might have the same aversion to Datsuns as he does.

I don’t know enough about cars to say anything too smart here, so I won’t try to fake it, but I do love old cars, and for some reason the 1970s-1980s Zs, or 240s (etc., see this is where I don’t really know what I’m talking about but I can ID them in a crowd) really appeal to me.

I did have a boyfriend for a short time who was into cars, and he had a 1973 Datsun 280zx (I think) that was orange with a T-top. I was 18, he was 23. He used to drive me to New York in that car. It was amazing. (Many things at once happening there; one of the marvels was the idea that a person could DRIVE into Manhattan, not just rely on the train, as my family did.) For some reason my parents were alright with this (?) and it wasn’t until after the fact did I realize the true reason he needed to travel to NYC so often, for his “business.” He was a generous, kind guy who really meant well, and tried to treat me right. When I went off to college he wrote me letters, filling the page with his thoughts and observations as he traveled, always misspelling many words but he was so full of heart. We lost touch as his life slowly unraveled into the world of heroin, and mine became consumed in the selfish existence that is a college student’s. The last time I saw him was probably between my junior and senior year, while on break, at a diner near my parents’ house. He was not well, and I wanted to help him, but I couldn’t.

Several years later I found out, in a very odd way, that he had passed away. The details were not shared with me, but I could only imagine the worst. I think about him sometimes, and I wonder what he could have been, how his life touched others like mine, if only for such a brief amount of time.

So I guess Datsun Z’s remind me of Bob. And I’m happy with that, and will always think of him when I see one. Maybe I’ll even get to drive one someday.

This entry was posted in secret car mechanic inside my head. Bookmark the permalink.

1 Response to >It’s hard to explain