I am fairly convinced that my year living with no kitchen set my cookingskills-domesticmaturity back a bit. Sort of like reverting to pre-college days when I thought I could replace eggs in cookie batter with water (so it could be eaten raw, obviously) and then watched the result of my innovation liquify into one big cookie drippy mess that flowed off the pan and onto the oven floor. (This is loosely tied to my very near failure of high school chemistry. Some things just don’t compute for me the first time around. Or the second, for that matter, but I’m not here solely to make myself look stupid.)

From March of 2009 until mid-April 2010 I lived with no kitchen. I thought about writing about it at the time, (hey what a cool blog idea! documenting a less-than-ideal life situation!) but those half-baked good intentions went the way of my watered down cookie dough. I spent a lot of time not thinking about it; instead functioning in a general haze of lollygagging internet activity, Law and Order episodes, perpetual laundry folding, and the ultimate time sink: playing with, speaking to, and photographing the dogs.

For the first few weeks, I had only a college-size refrigerator. I was stoked: an adventure! Like camping! I can do this! I smugly went to the grocery store, determined to make the best of my situation. I purchased as many prepackaged mini-sized preservative-filled delicacies as I could find. Mini cheeses, single serving fruit cups, anything that came in “bar” form, and with as much wrapping as possible. It was an environmentalist’s nightmare, a gluttonous Ugly American snack paradise of wastefulness and Other Natural Flavors. I learned quickly that Lean Cuisines will not stay frozen in the freezer “area” of small refrigerators. (Had I only recalled me and my college roommates’ pathetic attempts at early Jello shots that never came out quite right, I would have saved myself a couple of wasted dinners.)

Before I could completely lose my mind, the financial gods smiled on me (well, it may have been more of a grimace, but I take what I can get) and I was able to purchase a brand new “normal” sized refrigerator. The joy I felt buying condiments in standard-sized jars was euphoric. It almost made me forget about how I still had no kitchen, still washed my dishes in the bathroom sink, and still lived in one room with two dogs and saw no way out of the situation in the near future.

And luckily (luck? not so sure, do we make our own? more on this in the future) my circumstances and I were able to move me into a whole new living space this past spring where I now enjoy gasp four whole rooms, one of which is a kitchen.

However, I seemed to be experiencing some temporary amnesia when it came to things like operating a stove, making simple dressings and sauces, chopping vegetables, handling raw chicken…fish…how do fish work…? corn? boil? 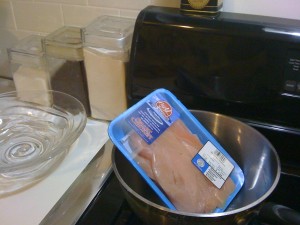 Perhaps the confusion was because the domestic goddess within me had never really solidified prior to this. I’d only had a couple years under my belt of cooking for two or more. Plus, a great deal of time from 2005-2009 was spent spending copious amounts of money in fancy restaurants…rather than perfecting my Coq au Vin.

I think I can say I’m back on a better (albeit different) track now. For those of you who are concerned, I did manage to remove the wrapping off the chicken I soon victimized in the photo, above right. I’m thoroughly enjoying my tiny kitchen, and I’m even doing some baking lately (read: science). Maybe my cooking renaissance will launch me forward out of beginner domestic goddess to a comfortable spot in intermediate.

This entry was posted in Uncategorized. Bookmark the permalink.